The Civil War in Arkansas was commemorated during several anniversary events during the twentieth century. The United Confederate Veterans held a reunion in Little Rock (Pulaski County) in 1911, the fiftieth anniversary of the outbreak of the war. In 1959, the Arkansas General Assembly created the Civil War Centennial Commission of Arkansas, which operated until at least 1965. While other events commemorating the Civil War were held in the state over the next several decades, the Arkansas Civil War Sesquicentennial Commission was the next official organization created.

The commission was organized with sixteen members and four advisors. The following members, or their designees, were appointed to the commission through Act 635 of 2007:

·       Richard Davies, director of the Department of Parks and Tourism

Act 635 also designated the following to serve in an advisory capacity to the commission:

·       M. Ray Jones III, president of the Arkansas chapter of the Sons of Confederate Veterans

·       DeeLois Lawrence, representing the Arkansas Division of the United Daughters of the Confederacy

·       Tom Ezell, representing the Sons of Union Veterans of the Civil War

With the conclusion of the sesquicentennial in 2015, the commission ceased to exist on December 31 of that year. The website for the commission remained online to allow researchers access to the materials gathered or created by the organization.

The Civil War Sesquicentennial commemoration in Arkansas included events and other outreach projects that reached thousands of citizens and educated them about aspects of the war. It proved to be one of the most successful historical outreach projects ever conducted in the state and provided a framework for future projects, including the Arkansas World War I Centennial Commemoration Committee.

Modern Era, 1968 through the Present
United Confederate Veterans Reunion of 1911 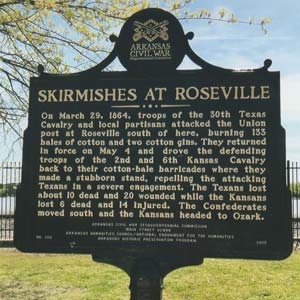