The Baxter Bulletin newspaper was established in 1901 in Mountain Home (Baxter County) by J. G. “Uncle Jess” Copeland, who had previously worked for both the Memphis Commercial Appeal and the St. Louis Post Dispatch. Over the years, it became a popular weekly turned six-day-a-week publication with a circulation of around 11,000.

Copeland sold the Bulletin in October 1903 to Joe Doehring and Will M. McNair. He then moved to Cotter (Baxter County) and established the Cotter Courier. Doehring was serving as both editor and publisher when the newspaper was sold to Tom Shiras in 1905. The next year, Enness Shiras joined his brother as co-owner of the paper. They owned and operated the paper for approximately forty years.

In 1926, Irl Paul and Rex Bodenhamer, two employees of the Bulletin, bought shares in the newspaper. Tom Shiras died in 1947, and Enness Shiras retired in the 1950s. In 1962, Paul sold his shares in the paper to Bodenhamer, and for the next eight years the Shiras heirs and Bodenhamer continued publication.

In 1970, the Shiras family sold the paper to Harold E. Martin of the Montgomery Advisor and Alabama Journal. The firm’s name was changed from Shiras Brothers Printing Company to Baxter County Newspapers, Incorporated. In 1972, Rupert E. Phillips became the Bulletin publisher along with Janet Nelson as managing editor. By 1976, Martin had become president of the Newspaper Division of Multimedia, Inc., of Greenville, South Carolina, and that same year the Bulletin was acquired by Multimedia. In 1985, the weekly Baxter Bulletin began publishing Monday through Saturday. In 1995, Multimedia was acquired by the Virginia-based Gannett Company, Inc.; by 2017, the Bulletin was the only Arkansas newspaper owned by Gannett, which had previously owned the Arkansas Gazette. (The Bulletin is part of Gannett’s USA Today Network.) 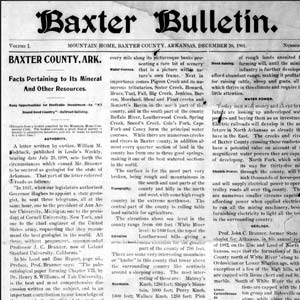