The Archaic Period refers to the time between 9500 and 650 BC in the Native American history of Arkansas. As was the case in other regions in North America, Arkansas’s Archaic Period was a long span of cultural development and innovation that transformed small-scale Paleoindian groups into the larger and more complex societies seen during the Woodland and Mississippian periods. Within the Archaic Period, archaeologists have identified more specific regional cultures, such as the Dalton, San Patrice, Tom’s Brook, Big Creek, and Poverty Point cultures. These do not correspond directly to the tribes that lived in Arkansas during the Archaic period but do show that Native American societies were adapting to different environments and to each other across Arkansas in new and distinct ways.

During the thousands of years after the Ice Age, human populations increased and settled into a range of environments across Arkansas. For the most part, Indians in the Archaic Period lived in hunter-gatherer communities that hunted, fished, and collected wild animal and plant resources for food. But it is too simplistic to view these people as roving bands of hunters or as primitive cave dwellers foraging a meager subsistence from the wilderness. It was during the Archaic Period that people first domesticated plants that later became the staple grain crops of farmers. In some areas, communities became stable and sedentary, and ritual or sacred locations were marked with mounds and earthworks. Instead of moving across the landscape to use natural resources directly, some groups traded raw materials and craft objects across wide areas.

A Changing Environment
Arkansas Indians during the Archaic Period had to adjust to changes in climate and environment following the Ice Age. While changes would not be noticed within a lifetime, these fluctuations in mean annual temperature and rainfall caused differences in the plants and animals that were available, as well as subtle alterations in water sources and terrain over the long term. While environment does not completely determine human culture, people adapt and change their behavior to succeed in a given environment (and people alter their physical environment, as well).

In the thousands of years after the Ice Age and the retreat of northern glacial ice sheets, forests spread across eastern North America. In Arkansas, oaks and hickories dominated the mixed deciduous forests, providing mast for grazing deer and supporting other woodland animals. The climate became warmer and dryer from about 7000 to 2500 BC in what scientists have termed the “Hypsithermal” interval within the Holocene Epoch. Prairie vegetation or more open savanna land extended farther east at the expense of hardwood forests. Indians in Arkansas during the Archaic Period dealt with droughts in summer and fewer sources of water across the landscape. More stable river valleys were inviting to groups like the Tom’s Brook Culture living along the Ouachita, Arkansas, and Red river drainages in southwest Arkansas around 5000 to 4000 BC. After 2500 BC, a cooler and wetter period led to the climate and vegetation patterns seen in recent times.

Obtaining Food
Archaic Period Indians in Arkansas lived in habitats that contained far more plant and animal resources than were present during the preceding Ice Age. People responded to environmental changes by developing new technologies for obtaining food. Hunting animals continued to be important, and hunters used stone-tipped darts thrown with the aid of spear throwers (“atlatls”). Many styles of dart points made of chert or novaculite have been found across the region, with specific forms characteristic of different cultural groups or used during certain millennia. Other stone tools included knives for butchering game and scrapers for working with hides. Animals such as deer, turkeys, and raccoons were hunted. People fished using bone fishhooks and nets weighted by stone sinkers. Shellfish also were collected, as is evident from the preserved shells found in some household trash deposits.

Communities
For many Archaic Period Indians, a successful adaptation to life in Arkansas mountains, forests, and river valleys meant having a variety of meat, fish, nuts, and other wild plant foods. These foods were available from many locations and at different seasons. Environmental conditions and resource availability may have encouraged people to move more often throughout the year to take advantage of widely separated resources or, alternatively, to settle down near dependable food and raw materials. Families or bands might move several times a year among several established camps in a known territory. Moving the group to the resources was a strategy that Archaic Period hunter-gatherers seem to have used in northwest Arkansas. Bluff shelters like the Albertson Site in Benton County were used for short durations by small hunting parties or seasonally by households that probably occupied other kinds of sites at different times of the year.

Another strategy for Archaic Period hunter-gatherers would be to situate the main community in a location known for dependable key resources and then send small groups to gather more distant food resources. People in the Dalton Culture in northeast Arkansas at about 9500 BC had base settlements or villages they occupied for much of the year, with temporary food collecting and hunting camps scattered around a watershed territory. At the end of the Archaic Period, conditions may again have encouraged settling down for longer periods in certain key locations, such as at fishing locales for people of the Poverty Point Culture.

When a community settled at a base camp or a village year-round, it could construct more substantial houses and storage facilities, as well as have more kinds of tools and containers. Pottery manufacture was not developed until the Woodland Period in Arkansas, but vessels carved from soft stone (steatite or soapstone) were used by Archaic Period people of the Poverty Point Culture living in southern Arkansas.

In addition to leading to population growth and an increased sense of territoriality, settling down into year-round base camps or villages may have led to experiments in plant domestication. Archaeologists have documented the early domestication of a suite of oily- and starchy-seeded plants in the mid-continent during the Archaic Period. Squash, sunflower, sumpweed, chenopod or goosefoot, knotweed, and maygrass were domesticated 2,000 to 4,000 years ago, long before domesticated maize, beans, and new kinds of squash were introduced into the region from Mexico by way of the Southwest. Paleoethnobotanist Gayle Fritz identified domesticated chenopod and possibly domesticated giant ragweed dating to about 1200–900 BC in preserved seeds stored in woven bags and baskets in the Marble Bluff shelter in northwest Arkansas. During the Woodland Period, these domesticated plants became important staple foods, with accompanying changes in cooking technology, such as the use of fired-clay cooking pots.

Mound building
Construction of mounds and earthworks, once seen as a Woodland Period development, is now known to have taken place first in the Archaic Period. Unlike later in history, Archaic mounds were not used mainly for burial or as platforms for buildings but instead marked important sacred places and designated public or community space. The Poverty Point Site in northeast Louisiana is well known for its concentric semicircular earthworks, embankment, and mounds that date to several centuries around 1300 BC. Arkansas’s candidate for the oldest mound site, Lake Enterprise, is contemporaneous with Poverty Point, according to current research.

New evidence from Louisiana indicates that Archaic Period mound building there reaches back beyond 3000 BC, well before the Poverty Point Culture. Contemporaneous Archaic Period groups in southern Arkansas, such as those of the Big Creek Culture (circa 4000–3000 BC), may also have left mounds that archaeologists have yet to recognize.

Trade and Interaction
Trade and exchange—or at least movement of raw materials and finished goods from one region of Arkansas to another—is characteristic of the Archaic Period. One of the best examples is the exchange of novaculite, a fine-grained rock that outcrops in the Ouachita Mountains and was widely used by Indians to make dart points, knives, and other tools (it was also mined in the nineteenth and twentieth centuries for whetstones). There are many quarry sites in the Ouachita Mountains where Indians battered boulders and dug pits to mine seams of novaculite. Partly worked or finished stone tools were transported from workshops on the Ouachita and Saline rivers to camps or villages in south Arkansas and beyond; novaculite tools have even been found on archaeological sites in Louisiana and Mississippi. The heaviest use of the quarries seems to have been late in the Archaic Period, when novaculite and other “exotic” stones—quartz crystal from the Ouachita Mountains, magnetite from Magnet Cove (Hot Spring County), chert from the Ozark Mountains—made their way to Poverty Point Culture sites.

Clearly, Native Americans in the Archaic Period in Arkansas were not as isolated as was once thought. The movement of raw materials and finished tools and crafted goods suggests interactions between different groups of people and the circulation of ideas as well. 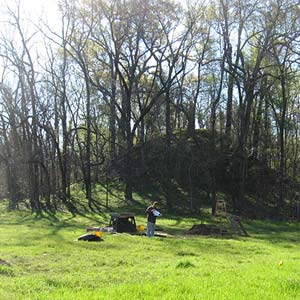